‘Why I dumped academics for shoe-making’ 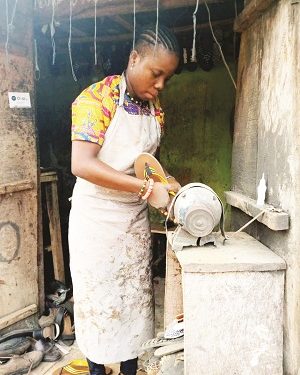 Despite her brilliance and skills in many areas, 22-year-old Happiness Nwanna has chosen to make shoes.  She tells EMMA ELEKWA in Awka why she took the decision.

Twenty-two year old Happiness Chidiebere Nwanna, a native of Umuayom Village in Awka South Local Government Area of Anambra State is  not only distinguished for her brilliance and industry, she is also a budding footballer recognised in her community for her gift.

In 2017, she graduated with the overall best result in the West African Senior School Certificate Examination (WASSCE) from the Capital Secondary School, Awka, where she was the deputy senior prefect of her set.

However, instead of going the academic route, Happiness settled for shoe-making. This was not deliberate but the result of difficulties in getting admission into tertiary institutions.

Happiness, who has done a lot of advocacy in schools for young people to preserve their virginity, shared her challenges with The Nation.

She said: “When JAMB dealt with me, I decided to go into shoe-making. I scored 276 in JAMB exam in 2019 with 49 in Post UTME to study Law at the Nnamdi Azikiwe University, (UNIZIK), Awka, but did not get admission though the cut off was 250 then.

“Before then, in 2018, I wrote JAMB exam and scored 235 for Mass Communication and 46 as Post UTME score, yet I was denied admission as well at UNIZIK, Federal Polytechnic, Oko and Anambra State University.

“That was totally strange to me because I thought I would make it once, judging by my intelligence and hard work.”

According to Happiness, she was compelled to write Sciences at the Post-UTME, contrary to the Arts subjects she studied.

She said she lost interest after her petition to the school management was not considered, and had to take her destiny in her hands to avoid succumbing to frustration.

Today, she has no regrets taking the step.  She said her boss, Mr. Ejioffor John, was impressed with her speed in learning.

“Nobody advised me to learn shoe-making. I took the bold step myself. Yes, it was hard for me to raise the N20,000 I was asked to pay to learn the trade. But I thank God for my boss, who was considerate to give me time to gradually raise N15,000.

She further disclosed that she had learnt sewing before venturing into shoe-making.

“Shoe-making was not my first trade. I had learnt cloth-making but my boss then refused to teach me the trade fully. So, I had to leave.

“I’ve come to realise that it is a man’s world but I am ready to  make huge success for myself. I won’t allow anything hold me down.

“When I decided to go into shoe-making, there was no hope to see a place in Awka unless in Aba, Abia State, until a friend, Chinenye John, who deals in unisex shoes, assisted me to locate where I am now.

“This is my third month and I am still marching on. I am just happy to be here and I give God all the glory,” she noted.

VIDEO: We are hungry, Lagosians cry out

VIDEO: We are hungry, Lagosians cry out