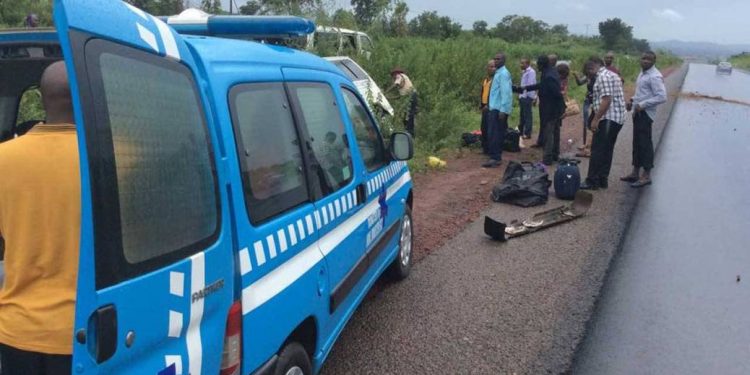 An accident at the New Makun (Ogun State) corridor of the Lagos Ibadan expressway on Friday has left two women dead and nine others with injuries.

The accident, which involved Toyota Hiace bus, marked KSF 272 YN, occurred when a burst tyre and the driver lost control.

The bus hits the road median and tumbled many times before it rested.

A witness said the Operatives of the Ogun State Traffic Compliance and Enforcement Corps (TRACE) and Federal Road Safety Corps (FRSC), who arrived the scene shortly after, were sighted rescuing victims, clearing the obstructions caused and directing traffics.

The TRACE Public Relations Officer, Babatiunde Akinbiyi, who confirmed the accident and statistics of the victims, said the injured were taken to the Idera Hospital, Sagamu by the TRACE Operatives while the FRSC officials evacuated the dead to the morgue of the Olabisi Onabanjo University Teaching Hospital (OOUTH), Sagamu.

Babatunde said: “We learnt the commercial bus was coming from Ilorin inbound Lagos when it experienced a tyre burst due to overspending and lost control in the process and thereafter somersaulted.

“Among the injured victims was the driver of the vehicle.

“While TRACE Corps commiserate with the family of the deceased victims, it implores motorists to avoid over speeding and the use of expired and worn out tyres for the safety of all road users.”

Uncle stabs nephew to death for quarreling with fiancé