President Donald Trump tried to blame a lot of things Monday for a series of horrific shootings over the weekend. What he didn’t do was take any of the blame onto himself or pledge to change his rhetoric.

He did blame violent video games, mental illness, the internet and a culture that promotes violence for helping to foster white nationalism and hatred behind at least one of the shootings that shocked the country.
He did not acknowledge the fact that he often traffics in some of the same language as white supremacists like the one who killed 22 people in El Paso.
Reading from a teleprompter at the White House, the President sounded nothing like the Trump who goes off-script when he tweets or is whipping up crowds of political supporters at campaign rallies. That’s why many are laying some blame for the shooting at the feet of the nation’s leader.
This is a politician who built his career around angry rhetoric and trying to pit groups of Americans against each other. No wonder that slightly more than half of Americans — nearly all of them Democrats — think their president is a racist.
He’s gained success by debasing the political conversation and appealing to Americans’ fears and prejudices, so it was jarring to hear him suddenly and tersely condemn hatred.
“In one voice, our nation must condemn racism, bigotry and white supremacy,” Trump said Monday. “These sinister ideologies must be defeated. Hate has no place in America. Hatred warps the mind, ravages the heart and devours the soul.”
But elsewhere, Trump has repeatedly warned of an “invasion” of immigrants, preying on people’s anger, fear and frustration and intentionally trying to divide the country. Earlier Monday, he pointed fingers at the media: “News coverage has got to start being fair, balanced and unbiased, or these terrible problems will only get worse!”
The suspected shooter in Texas, who was arrested Saturday, used similar enough language in a hate-filled manifesto that he made clear his thoughts pre-dated Trump’s rise to power. It is not clear what motivate the shooter in Ohio and he died during the shooting.
Trump: Don’t know if I can stop ‘send her back’ chant 01:15
It’s also clear from Trump’s speech that while he condemned white supremacy, that the Ohio shooting in which nine people were killed in minute, may help the White House try to take the focus off the origins of the El Paso shooting.
Monday, Trump argued internet sites like 8chan bear some responsibility for creating a haven for hateful ideas. And said American culture has surrounded people with violence. He called for a cultural change and an update to mental health laws and promised to pursue the death penalty against mass shooters. He did not propose new restrictions on guns.
Trump has previously defended his repeated use of the word “invasion” to describe asylum seekers and immigrants at the southern border and made no apologies for it.
“I call it “invasion,” Trump said at the White House in March, defending his decision to send members of the US military to the border. “They always get upset when I say ‘an invasion.’ But it really is somewhat of an invasion.”
He was not bothered when his supporters chanted at a July rally that an American congresswoman should be “sent back” to the country where she was born.
He smiled at another rally in Florida when an audience member said one way to deal with the tide of immigrants would be to shoot them. 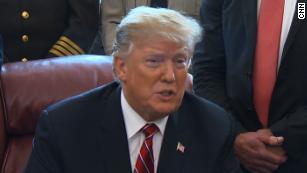