Tragedy As Pregnant Woman, Two Others Die In Ghastly Auto Crash In Osun 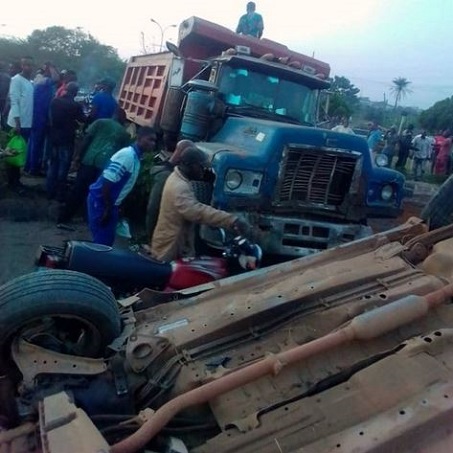 Scene of the unfortunate accident

A pregnant woman died Saturday evening as a result of an auto accident that occurred at Lamenco Area of Osogbo, the Osun state capital.

A truck popularly referred to tipper, with registration number FNN 364 XA, loaded with sand was heading towards stadium on the West bye pass before its break failed as it approached the sloppy Lamenco roundabout.

According to an eye witness, Mathew Alalade, the tipper crushed a commercial motorcyclists with the two passengers on the bike.

He said the two passengers, a male and female died on the spot while the motorcyclists was rushed to the hospital for treatment.

Another source, Wale Okiki corroborated that the tipper lost it break while it was approaching the roundabout and was left with no choice that to use the median as a barrier but unfortunately the motorcyclists had gotten to the spot.

He added that apart from the motorcyclists and the passengers crushed by the tipper, it also smashed another Nissan Premere vehicle, with registration number EJG 581 AA, that was negotiating the bend.

Wale said, “The tipper lost it break and was struggling to stop the car but failed, he was attempting to climb the wall of the roundabout when he crushed the commercial motorcyclists with the two passengers on it.

The incident resulted into traffic until the Osun State Ambulance Service arrived the scene to evacuate the bodies and the survivor to the hospital”.

Meanwhile, the Special Adviser to the state Governor on Public Health, Pharmacist Siji Olamiju said the incident involved five persons, three on the motorcycle and two persons in the Nissan vehicle.

He said two persons, a young lady and motorcyclists died on the spot, while the other woman who was pregnant was rushed to the state hospital, where she was eventually died.