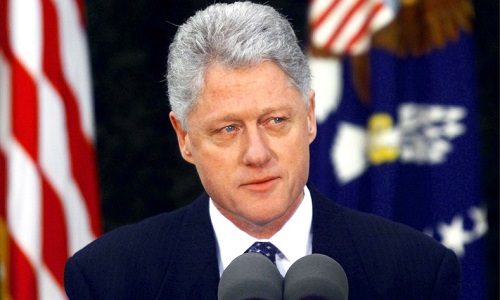 After nearly 14 hours of debate, the House of Representatives approved two articles of impeachment against President Bill Clinton, charging him with lying under oath to a federal grand jury and obstructing justice. Clinton, the second president in American history to be impeached, vowed to finish his term.

In November 1995, Clinton began an affair with Monica Lewinsky, a 21-year-old unpaid intern. Over the course of a year and a half, the president and Lewinsky had nearly a dozen sexual encounters in the White House. In April 1996, Lewinsky was transferred to the Pentagon. That summer, she first confided in Pentagon co-worker Linda Tripp about her sexual relationship with the president. In 1997, with the relationship over, Tripp began secretly to record conversations with Lewinsky, in which Lewinsky gave Tripp details about the affair.

In December, lawyers for Paula Jones, who was suing the president on sexual harassment charges, subpoenaed Lewinsky. In January 1998, allegedly under the recommendation of the president, Lewinsky filed an affidavit in which she denied ever having had a sexual relationship with him. Five days later, Tripp contacted the office of Kenneth Starr, the Whitewater independent counsel, to talk about Lewinsky and the tapes she made of their conversations. Tripp, wired by FBI agents working with Starr, met with Lewinsky again, and on January 16, Lewinsky was taken by FBI agents and U.S. attorneys to a hotel room where she was questioned and offered immunity if she cooperated with the prosecution. A few days later, the story broke, and Clinton publicly denied the allegations, saying, “I did not have sexual relations with that woman, Ms. Lewinsky.”

In late July, lawyers for Lewinsky and Starr worked out a full-immunity agreement covering both Lewinsky and her parents, all of whom Starr had threatened with prosecution. On August 6, Lewinsky appeared before the grand jury to begin her testimony, and on August 17 President Clinton testified. Contrary to his testimony in the Paula Jones sexual-harassment case, President Clinton acknowledged to prosecutors from the office of the independent counsel that he had had an extramarital affair with Ms. Lewinsky.

On February 12, 1999, the Senate voted on whether to remove Clinton from office. The president was acquitted on both articles of impeachment. The prosecution needed a two-thirds majority to convict but failed to achieve even a bare majority.

Trump gave us no choice on impeachment, says Pelosi