The Nation stars at NMMA 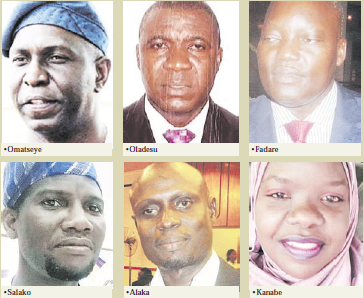 With a haul of eight honours, 18 nominations in 17 categories, The Nation on Sunday night proved its mettle at the 27th Nigerian Media Merit Awards (NMMA).

At the event, held at the Muson Centre in Onikan, Lagos State, this newspaper beat The Punch in the Prize for Editorial Writing of the Year.

He said: “I want to heartily congratulate the eight worthy award winners, on their fantastic achievements. Such acclamation and recognition is becoming something of a noble tradition at The Nation. Nonetheless it is never to be taken for granted; we should celebrate!”

This year’s NMMA featured 37 categories in print and six each for radio and television.

Multiple awards winner Sina Fadare beat Vanguard and Nigerian Tribune nominees in the 9Mobile Prize for Innovative Reporter of the Year with his story “The magic of smokeless coal.” His report “Beekeeping: Gateway to wealth creation and good health” was runner up in the Bukola Saraki Prize for Agriculture Reporter of the Year, won by Ebhuomhan Sebastine of Daily Independent.

Fadare was recently appointed as Editor of Yoruba newspaper in the Vintage Press Limited stable – Gbelegbo.

With his report “Revealed: How N600m SURE-P funds for tourism were misappropriated,” Innocent Duru floored two entrants from New Telegraph to clinch the Adamu Mu’azu Prize for Tourism Reporter of the Year.

Assistant Editor Gboyega Alaka’s investigative piece “Shina Rambo is dead! Pastor who claims to be Shina Rambo is fake” won the coveted Ernest Sisei Ikoli Prize for Newspaper Reporter of the Year and Medinat Kanabe was crowned the NMMA Female Reporter of the year with her story “Anyone can be victim of maternal mortality.”

Prolific sports writer Alimi Taiwo was a finalist in the Bashorun MKO Abiola sports reporting category which former New Telegraph’s Deputy Sports Editor Dapo Sotuminu clinched; Energy Editor Emeka Ugwanyi was runner up in the Peter Odili Prize for Power Reporter won by Ujah Emmanuel of Vanguard. Ugwuanyi was also runner up in the Chevron Nigeria Prize for Oil and Gas Reporter which Juliana Francis of the New Telegraph won.

Assistant Editor Okwy Iroegbu-Chikezie’s report “ECOWAS protocol under xenophobia threat” was runner up in the Olusegun Mimiko Prize for Foreign News Reporter; Money Market Correspondent Collins Nweze was runner up in two categories: Sonny Odogwu Prize for Business Reporter of the Year, and Union Bank Prize for Banking and Finance Reporter. Industry Correspondent Oluwakemi Dauda was finalist in the Nigerian Port Authority (NPA) Prize for Maritime Reporter of the Year.

This newspaper has consistently lived true to its mandate of “truth in defence of freedom,” parading an array of seasoned professionals.

The Nation won the NMMA Newspaper of the Year in 2018 with four other awards, emerging runner up in 16 categories. In 2017, this newspaper’s reporters clinched 10 of the 29 prizes up for grabs in the print media category, leaving seven other newspapers to share the remaining 19.

This year, The Punch had seven wins, including the Babatunde Jose Prize for Newspaper of the Year, which it contested with The Guardian and Daily Trust; Alade Odunewu Prize for Columnist of the Year (Adelakun Abimbola); Cecil King Memorial Prize for Print Journalist of the year (Samson Folarin), Photographer of the Year (Obasa Olatunji) and MTN Prize for Telecommunications Reporter of the Year (Ogunfunwa Adedoyin). It had 18 nominations in 13 categories.

With record 34 nominations in 24 categories, New Telegraph clinched 10 awards; The Guardian got five awards, including the Dele Giwa Prize for Editor of the Year; Vanguard won three and The Sun won one.

Other winners at the event were Tony Okuyeme whose story “High expectations amid disquiet over national theatre” won the Olu Aboderin Prize for Entertainment Reporter; Isioma Madike’s entry “The dying culture of giving first salary to parents,” won Olagunsoye Oyinlola Prize for Culture & Tradition; Dorothy Orakpo won the Ibrahim Shekarau Prize for Education Reporter with the story “Deepening rot in education sector triggers alarm”; China Abanobi won the Olusegun Mimiko Prize for Foreign News Reporter with “Flipside of the American dream” and Princewill Ekwujuru’s “Divergent views in debate over relevance of CSR” got the Keystone Bank Prize for CSR reporter.

Award Committee Chairman Prof. Ralph Akinfeleye said there was no winner for the Buba Marwa Prize for Defence Reporting because the nominations were below the 70 per cent cut-off.

He urged editors to be meticulous in editing copies to minimise errors, and encouraged media practitioners to uphold the tenets of the profession.