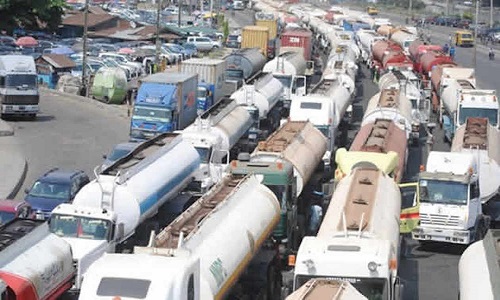 Petroleum Tanker Drivers (PTD), a branch of National Union of Petroleum and Natural Gas workers (NUPENG), has called on the Federal Government to clear Lagos roads of  containers to avoid strike by  January 15.

They said it was unacceptable for its members to be forced to spend weeks  before loading petroleum products at   Tank farms in Apapa,Lagos.

The PTD issued the strike notice at the weekend after  electricity workers  threatened to resume their recently suspended   work boycott, if the  government failed to implement  the agreement reached with them.

The National Chairman of the PTD,  Salmom Akanni Oladiti, who  addressed  the quarterly branch executive meeting of the body  in Benin, Edo State, said:  ”We may be forced to take some decisive actions in the New Year, including pulling off our tankers from January 15,  as we cannot fold our hands while our members are suffering in their bid  to serve the nation.”

Oladiti noted  that the Federal Task Force set up to decongest Lagos roads of trucks carrying containers had tried, lamenting that the problem of gridlock,  particularly at the  Coconut and Tin Can Island axis, still persisted.

He said: “The founding fathers meant well by constructing over 5,000 kilometres  of pipelines. If successive governments since 1999 had paid attention to roads and vandalism, the situation of the facilities would not have degenerated to the current level.

“We have written severally to all appropriate authorities on this matter of Apapa gridlock. The situation rather than improving is getting worse. We cannot continue like this.

“It appears there are some powerful and untouchable individuals in the Nigeria Ports Authority that are frustrating every effort  of government to find a solution to the issue.”

Olamiti also urged the government to speed up the current rehabilitation and reconstruction of the Benin-Warri and Benin-Auchi-Lokoja roads.

In Lagos at the weekend, electricity workers said the Federal Government should the implement of the agreement, which necessitated the suspension of their strike.

The electricity workers who are under the aegis of National Union of Electricity Employees (NUEE) had on December 12 suspended their less than 48-hour strike after government representatives and others signed an agreement to look into their demands.

NUEE had accused the Bureau of Public Enterprise (BPE) of failing to fully pay the over 2,000 disengaged workers of the defunct Power Holding Company of Nigeria (PHCN) since 2013.

It also alleged underpayment of severance entitlement of over 50,000 ex-Power Holding Company of Nigeria workers and illegal transfer of schools built by the union to investors.

The union accused powergeneration companies of refusing to honour conditions of service and rules of engagement, and some distribution companies of denying  retirement benefits to electricity workers.

The General Secretary of NUEE, Joe Ajaero, at the 6th quadrennial/11th national delegates conference of the union, in Lagos, said agreement must be implemented to avert a resumption of the strike.

But their senior counterparts in the power sector faulted the suspended strike, saying the conditions precedent were not followed by NUEE,

They said through their umbrella body, the  Senior Staff Association of Electricity and Allied Companies (SSAEAC),  that  they  had written the Minister of Labour and Employment, Chris Ngige, and his Power counterpart, Saleh Mamman, detailing why the strike by NUEE  was a wrong approach.

President General of SSAEAC, Chris Okonkwo, told journalists in Lagos at the weekend that  a copy of the letter was sent to  the Presidency.

However NUEE and SSAEAC agreed on  the need for an urgent intervention by the Federal Government   in the power sector to save it from collapse.

NUEE  through  Ajaero  said  the  government should   declare an emergency in the  sector  as Nigerians were totally dissatisfied with its performance.

It stated that it was obvious to everyone that those in charge of the sector had no blueprint on how to move it forward.

NUEE said: “We cannot continue to lament. Let the ministers of power and others tell Nigerians the situation in the power sector.

“If they do not have, we think there is need to declare an emergency in the power sector

“There is need for us to sit down to discuss the way forward. All stakeholders should join hands to rescue the sector from collapse. Nobody is happy with what is happening in the sector. Nigerians are not happy. The level at which our members are being assaulted, harassed and beaten up is increasing. Nigerians are venting their frustration on   our members.”

SSAEAC also believes that there is a   need for  interventions in the power sector  as it has failed to meet the expectations  of  Nigerians.

The Federal Government, it  said, must be bold enough to review the privatisation of the power sector, as some of the private companies in involved  have failed to live up to expectation.

Adoke to present documents on $1.06b Malabu oil deal