Police Officer Tells The Inspiring Story Of How He Got A First-Class From Federal University, Dutse 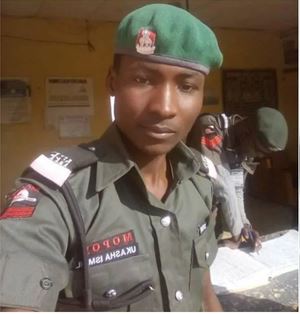 A young Nigerian police officer identified as Ukasha Ismail has celebrated his graduation from the Federal University Dutse, Legit reports.

The young officer also celebrated graduating with a first-class degree.

The police officer obtained a first-class bachelors degree in criminology and security studies. Ismail is a personnel of the Nigerian Mobile Police (MOPOL).

In a chat with Legit.ng, Ismail revealed that he decided to share the good news to change the view people have about Nigerian police officers. He also noted that the police force does not recognise such achievements.

The MOPOL officer who hails from Gwaram local government area of Jigawa state is a sergeant.

He said: “I was awarded a Bachelor of Science Degree in Criminology and Security Studies, First Class Honor by Federal University Dutse, Jigawa state. As a Police Personnel, this is rare in Nigeria.

“So I feel it is worth sharing to send a different impression about Police Personnel. Moreover, I honestly want to publish because the NPF doesn’t recognize such achievement, especially where a Junior Officer is involved. By the way, I am a Sergeant by rank.

“I wish to add that I hail from Gwaram LG of Jigawa state and currently serving as MOPOL in the same state.”