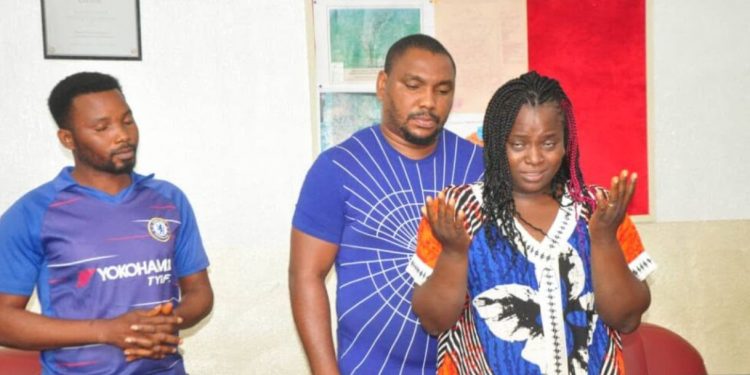 The maid whose name was identified as Peace Goewam was slammed by the woman, whose identity was given as Mrs Amaka Ortolehi.

Mrs Ortolehi and her husband, Nkemakolam, are said to be natives of Ngor Okpala in Imo State.

The maltreatment of the underaged housemaid had gone viral, as the video showed Mrs Ortolehi, pulling out the girl from a blue car as well as lifting her up and heavily slamming her on the ground.

The woman was also shown where she hit her own daughter mistakenly, with her car door.

Mrs Ortolehi, told reporters that she was pushed by the devil to treat the girl harshly while also blaming her action, partly on anger. “I did it in a feat of anger,” she said.

State Police Commissioner, Ahmad AbdurRahman confirmed the arrest of the woman, saying that his command traced and arrested the woman and rescued the little girl from the household.

AbdulRahman said the police arrested both Amaka, her husband, and one Jonathan Goewan, who claimed to be the cousin of the girl and gave her to the couple as house help.

The police commissioner decried the action of the woman as a clear case “heartless inhumanity to man.”

His words: “When I viewed the viral video, it was an eyesore; I gave order to my technical officers and anti-cult team.

This eventually led to her arrest, alongside her husband. “We also arrested one Mr. Jonathan Goewan, the uncle to the victim, who out of greed brought her to Enugu from Jos and probably sold her to this wicked family. Irrationally, she held her own daughter who she had affection for but was thrusting this very girl on the ground as if she was killing a fowl.

“The woman’s husband was arrested because the girl can’t be his daughter and he will allow her to be employed as a maid. It is clear heartless inhumanity to man.

“Do you know that as very brave police Mobile, MOPOL, Commander, I had fear watching the video again.

“It shocked me. God is wonderful, this girl did not sustain any injury; God protected the poor girl. It is a miracle.

“I will charge her with all her accomplices. By the grace of God that will serve as a deterrent to other intending couples who employ underage people and children for child labour.

He further stressed that the rescued girl would be handed over to a government agency that will take care of her till the police trace her parents.

“They will come down and tell us why they divorced this girl from them; as for the uncle, he has no satisfactory answer, so we are suspecting foul play.

“This is typical example of child abuse, child labour, torture.”

Pressure on naira as reserves dip to $39.2b