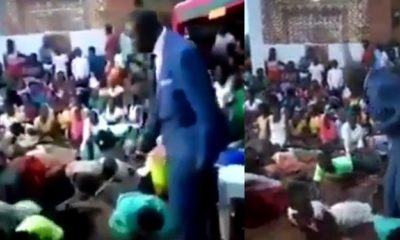 A controversial Ugandan pastor, Paul Muwanguzi has come under severe criticism after a video surfaced showing him flogging the hell out of his church members who missed his previous service.
In the viral video, they were seen lying on the floor as the pastor walks through them to flog each one of them.

Kenyan radio station, Wish FM shared the video with the caption:
“Pastor Paul Muwanguzi canes his followers who didnt turn up for church service the previous Sunday. But Uganda why??”
Social media users have condemned the man of God for the act.