Fagemi said the action was taken in a move aimed at sanitizing the state highways and ensuring free flow of traffic. 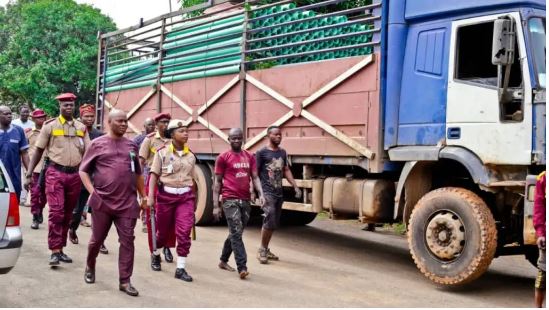 The impounded vehicle
The Oyo State Road Transport Management Agency (OYRTMA), on Thursday, impounded no fewer than fifty vehicles parked along the popular Iwo-Road, on Lagos-Ibadan highway in Ibadan, the state capital.
Chairman of the agency, Akin Fagbemi led men and officers of the agency to impound the fifty vehicles.
Fagemi said the action was taken in a move aimed at sanitizing the state highways and ensuring free flow of traffic.
Source reports that several heavy-duty vehicles were indiscriminately parked along the road, causing huge obstruction to free vehicular movement along the corridor and paralyzing economic activities around the area.
The trailers were taken to the agency’s headquarters in the State secretariat at Agodi to free up traffic and allow business activities to flow.
Fagbemi, while addressing the drivers of the impounded vehicles, said the present administration in the State was not out to make life unbearable for the people of the State but to do all within the ambit of the law to woo foreign direct investors by creating enabling environment devoid of avoidable and perpetual traffic jams. 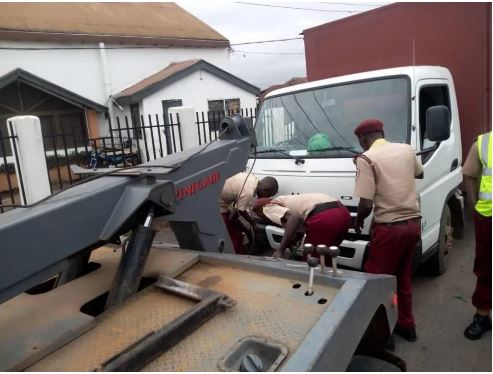 “You may recall that we recently announced the approval by the governor for immediate use of a 250-trucks capacity parking space at our Sanyo operational centre.
“While frantic efforts are on to secure other parking spaces across the State, we implore all heavy-duty vehicle operators to utilize the available park and desist from indiscriminate parking on the highways as this is highly inimical to other road users as well as the fact that it cripples economic activities within the State.
“This operation is not to witch-hunt anybody. We are aware of the technical implications of the continuous parking of this heavy-duty vehicle whose imposing weights far supersedes that of the designed load-carrying capacity of the highways, thus destroying the roads by creating portholes at different sections of the highways.
“We, therefore, enjoin all trailer operators within the State to cooperate with the State Government to achieve free flow of traffic across the 33 local government areas of the State.”