Nigeria Power Rush: Who will deliver us from the endermic that has almost engulfed us?

Anti-corruption efforts of all kinds have failed in Nigeria. The Nigerian state is no longer seen as legitimate. The poverty rate in the country’s northeast– the center of Boko Haram– is 76%, while that in the Northwest is 80%. Armed insurgencies have become contractors of the state.

Each successive president approaches what are really brain tumors as if they are migraines. The war against Boko Haram persists. It has not been defeated and probably will not be in the next couple of years. The inability of the government to deal with this challenge is spreading like wild fire.

According to the Institute for Economics and Peace, “Boko Haram has overtaken ISIS as the deadliest terrorist group,” responsible for more deaths than the latter years. Both the rich and poor are not secured and not sure who will be the next victim.

How is Ortom tackling the challenges of governance in Benue?

Will democracy ever work for Nigeria?

Elections provide a route to take control of the resources of the state via the capture of pre-bends for self-settling.

If Boko Haram and other insurgent groups did not exist, the Nigerian government would have had to invent them. They become means of looting the treasury in the name of “national security challenges.” The fundamental rationale is extracting resources. International anti-corruption agencies have ignored the interwoven dynamics of corruption and social inequality; even those whom we think are saints in fighting corruption allegedly turn out to be sinners.

The higher the corruption, the lower the degree of social inclusion; hence, the greater the insecurity.

Nigeria will not endure much longer unless there is a rethinking of the nature of the state. A new system must be built in which there are incentives for people to comply with desired ethical norms. Structural transformation will require changing the constitution of Nigeria. Prebendalism is part of the fundamentally flawed logic. Right now, electoral politics are impossible without corruption.

It is high time we prayed to God for a selfless saviour who can save us from this unquenchable wild fire of amazon that is gradually engulfing us and if we do not take stern action now and get serious, we shall all become the victims of our own makings.

Jose Antonio sits on a plastic chair in an open-air wooden shack, the makeshift headquarters of his illegal gold mining operation. It is one of the hundreds here, in the Tapajos River basin in Para State in the Amazon region of Brazil.

Outside, a hydraulic digger is parked near the edge of a vast mining pit that has been carved into the rainforest’s reddish-brown earth.

The digger needs parts that will be flown in shortly via a small aircraft to a clandestine landing strip, a 10-minute motorcycle ride away over a river crossing and through an indigenous village. 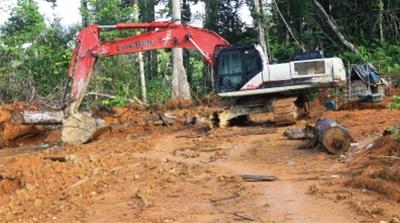 A digger used for illegal mining on an indigenous territory in the Tapajos River basin region, where in recent years, illegal mining has become increasingly capital intensive [Sam Cowie/Al Jazeera]

Thousands of illegal miners called garimpeiros are digging for gold, tearing down forests, polluting rivers and encroaching on indigenous lands.

“As far as I’m concerned, if an indigenous [person] wants [to do] mining on his land, he can,” Bolsonaro said in a recent edition of his weekly Facebook Live programme.

There are more than 450 illegal mining sites in the Brazilian Amazon region. And dozens are on indigenous lands, according to research by the Amazon Geo-Referenced Socio-Environmental Information Network.

Relating it to Nigeria

“We are intoxicated with politics. The premium on political power is so high that we are prone to take the most extreme measures in order to win and maintain political power, our energy tends to be channeled into the struggle for power to the detriment of economically productive effort, and we habitually seek political solutions to virtually every problem. Such are the manifestations of the overpoliticization of social life in Nigeria.” -Professor Claude Ake

President Buhari to participate in TICAD7 in the city of Yokohama, Japan