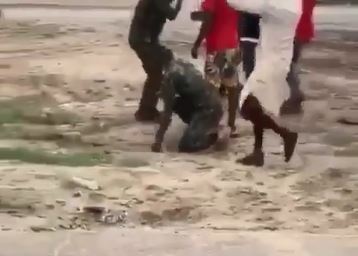 Soldier getting the beating of his life in Warri
Some soldiers who reportedly killed a newly engaged man in Warri area of Delta state have been given the beating of their lives after they were caught.
It was gathered that the man killed by the soldiers had recently got engaged to his pregnant fiancee and was on his way to get money for her medicine when he was confronted by the soldiers.

In the course of the confrontation, one of the soldiers stationed at the location to enforce stay-at-home order, lost his cool and shot at the man.
The situation has caused anarchy in the town as the angry mob reacted by burning down a motorcycle and attacking two persons in army uniform believed to have had a hand in the act.
Watch the videos that has caused a stir online below: