Lagos Teacher Breaks Pupil’s Arm While Flogging Him Over Test 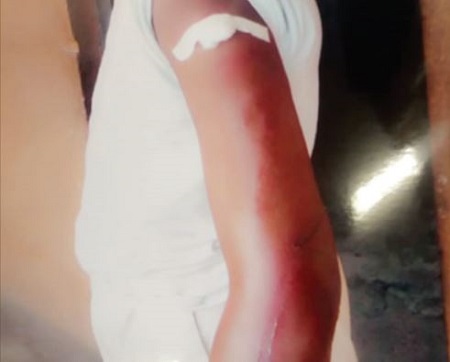 A teacher at CMS Grammar School, Bariga, Lagos, Mr Ikena Ekwenam, has been arrested by the police for inflicting injuries on his 10-year-old pupil, David Uwakwe.

Ekwenam, who teaches Agricultural Science at the school, beat up the Junior Secondary School 2 pupil for allegedly failing to come early for a make-up test.

Sunday PUNCH learnt that the teacher on Friday, November 22, went to Uwakwe’s class and told him he could not find his script on the continuous assessment earlier conducted, asking him to come for a make-up.

It was gathered that the week was slated for revisions and Uwakwe could not go for the test at Ekwenam’s office until much later in the day when the teacher was not around.

Angry that the boy did not show up on time, the teacher reportedly went to his class and gave him several strokes of cane, causing a dislocation to his arm in the process.

His mother, Adejoke, told our correspondent that she was shocked to find marks of beating on her son’s body when she went to pick him up after the closing time.

She said, “As I got to the school that afternoon, some of his classmates ran to me and said their Agric teacher beat David (Uwakwe) and he sustained injuries. I met my child in front of the school clinic which was already closed and took him to the Vice Principal Administration.

“The VP directed the clinic officials to give him anti-tetanus injection and antibiotics because there were bruises all over his body and he was bleeding. I took him to the principal who pleaded with me. I left the school with my child and called my brother-in-law because my husband was not around. I told him what happened.

“Before he met us at where we were, my son’s hand had swollen. I went back to the school with my brother-in-law and the principal was angry with us. I told the principal that one of the teachers must follow us to the hospital and one Mr Mayowa was assigned to follow us to the National Orthopaedic Hospital, Igbobi. It was discovered at the hospital that the boy had a dislocation in the arm region.

“People at the hospital wondered if he had an accident because there were marks of cane on his two hands and buttocks. They were annoyed. The doctor treated him and put POP (Plaster of Paris) in his hand. He was discharged the following day.”

Adejoke said the boy had an accident in December last year and suffered a fracture to his right thigh, forcing him to undergo a surgery.

She stated that he stopped using crutches some weeks ago, adding that she was pained that the school did not take the case seriously.

She said she consequently petitioned the Domestic and Sexual Violence Response Team of the Lagos State Ministry of Justice.

The woman stated, “They did a test in school and he participated. The teacher misplaced his script and told him to come for a makeup. The boy said they were in the revision week and that teachers were coming one after the other into their class to teach them. It was in the afternoon that he went to see the teacher and he didn’t meet him in the office. The man then came to his class; took him out and flogged him angrily. I was told that his class teacher did not intervene.”