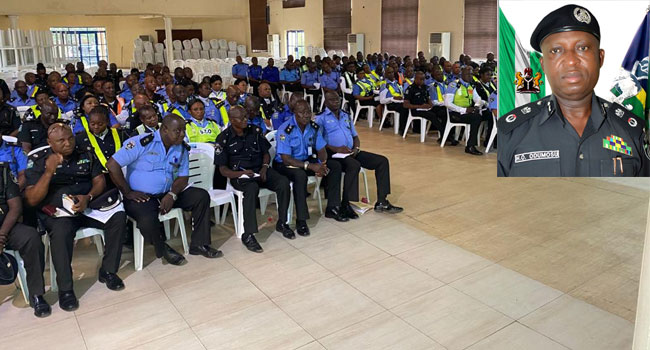 Barely two days after taking over as Commissioner of Police for Lagos State, CP Hakeem Odumosu, has declared a state of emergency on traffic management and control in the State.

He has also ordered the immediate deployment of an additional 1,000 Police officers to traffic duties.

According to a statement signed by the Police Public Relations Officer in the state, DSP Bala Elkana, the CP gave the order during an emergency meeting he summoned in the Command’s Headquarters to review the current traffic situation in the State.

In attendance were Deputy Commissioners of the Police Department of Finance and Administration, Department of Operations, Criminal Investigation Department and Rapid Response Squad.

Also, in attendance were Area Commanders, Area Operations Officers, State Traffic Officer, Divisional Traffic Officers across the State and the Chairman Lagos State Taskforce on Environmental and Special offences, among others.

The CP also reviewed the time for duty report for Traffic Officers to take care of the peak hours.

Consequently, traffic duty officers will run shifts between 10:00 am and 10:00 pm while the second shift will be 10:00 pm to 10:00 am, providing a 24-hour coverage.
They will all operate in their usual reflective jackets.

According to the CP, the measure will help in ensuring a free flow of traffic and will also curb the menace of robbery during traffic.

Meanwhile, the Commissioner of Police called on Lagosians to obey traffic laws and accord the police officers on traffic duties maximum cooperation.

Any Request From Buhari Will Make Nigeria Better, We’ll Act On It Expeditiously – Lawan