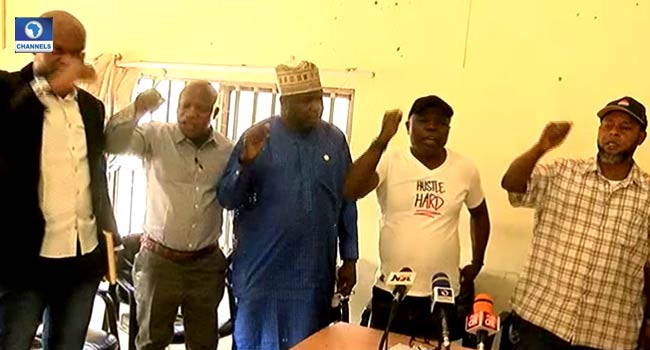 Kwara workers during the emergency meeting held at the Labour house in Ilorin, Kwara State capital on Tuesday, December 17, 2019.

Workers in Kwara State on Tuesday threatened to embark on industrial action if the State Government does not implement the N30,000 new minimum wage.

The labour union which comprises of Nigerian Labour Congress (NLC) and Trade Union Congress (TUC) disclosed this during an emergency meeting held at the Labour House in Ilorin, the state capital.

According to them several efforts made to convince the state governor Abdulfatah Ahmed on the need to constitute minimum wage committee has not been met.

According to the workers, six states have commenced the payment with ten already negotiating; therefore Kwara State should not be left behind.

The state chairman of TUC, Kola Olumoh during the meeting said the “issue of the N30,000 minimum wage has been passed into law and it should be seen as an act of the law that is binding for state governors to emulate.

“We are ready and willing to ensure that the state government pays the minimum wage of N30,000 by the virtue of the adjustment that has been made and signed by Labour.

“We hope and expect that the state government will be magnanimous as a way of giving back to the workers, the dividends of having voted them in to pay us our N30,000 minimum wage before December 31st.”

Meanwhile, the state government through a statement signed by the Chief Press Secretary to the governor, Rafiu Ajakaye says the governor has directed the head of service to immediately constitute a minimum wage committee.