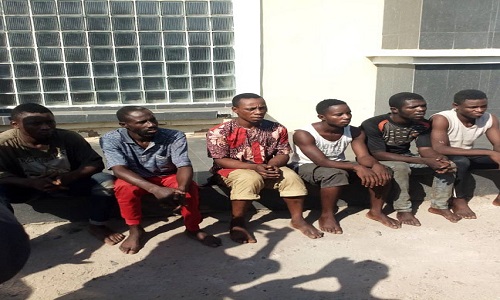 Those paraded at the Police Command headquarters, Lokoja, include Ocholi Edicha (30), who allegedly led others that burnt the late PDP Women leader alive in her home in Ochadamu in Ofu Local Government, two days after the November 16 Kogi State governership election.

Others paraded alongside Edicha, include Adamu Haruna, Onu Egbune, Musa Alidu, Attai Haruna Egwu and Attah Ejeh, while others are said to still be at large.

The late Salome Abuh was laid to rest in her Aji-Obala, Ofu Local Government village.

According to the Commissioner of Police Hakeem Busari, Edicha, during interrogation confessed that he led the gang that burnt the house of Elder Simeon Abuh (widower of the slain woman).

“During interrogation, Ocholi Edicha confessed that he led the gang that burnt the house of Elder Simeon B.S Abuh, which led to the death of his wife, Mrs Salome Achejuigu.

“The suspect further confessed that they were responsible for the series of armed robbery incidents in Ochadamu and its environs.

“The Kogi State Police Command while condemning the killing of Mrs Salome Abuh and Awolu Zekeri, calls for calm and assures residents that all the perpetrators will not go unpunished.

“Efforts are still on to get other members of the gang. All suspects will be arraigned in court,” the CP said.

Edicha, denied being among those that set the Abuh residence ablaze, with the PDP Women leader inside, much less leading those that perpetrated the act.

He also denied ownership of a locally made double barrel gun, which the police stated was recovered from him (Edicha).

He said that those that carried out the act were All Progressives Congress (APC) members from Ejule.

He also absolved the five others that were paraded.

At her burial last Saturday, the widower Elder Abuh said that the late Salome Abuh has paid the supreme price for Igala land through politics.

He described her as a martyr whose political sagacity will remain fresh in the minds of her political associates.

He called on the Federal Government to ensure that the perpetrators of the heinous act were arrested and brought to book.

The candidate of the Peoples Democratic Party (PDP) in the Kogi governorship election, Musa Wada, said that Salome Abuh died for Kogi State and the Igala nation.

“I am not going to relent – I will pursue this gruesome and senseless killing of Mrs Abuh to a logical conclusion.