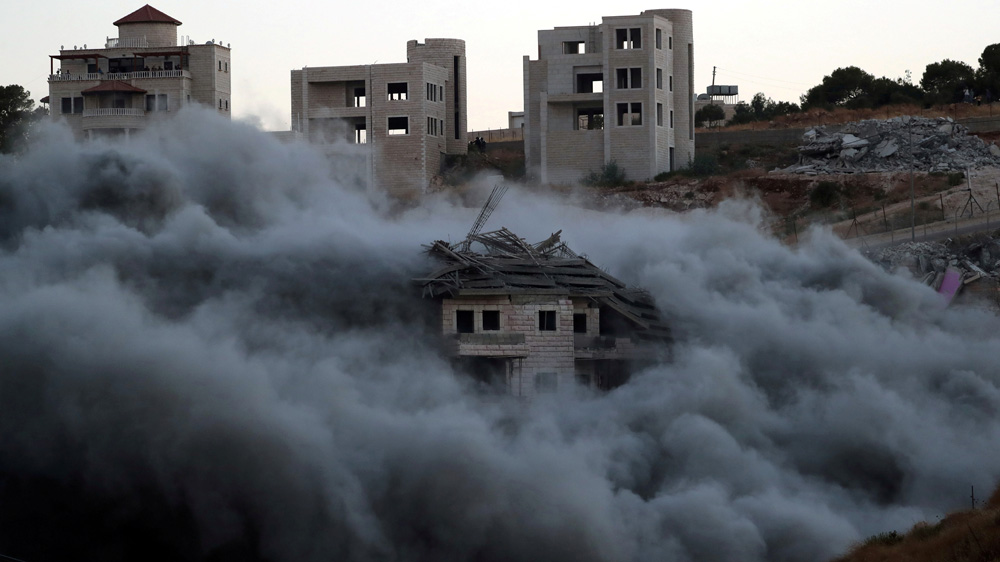 United Nations – The latest demolitions of Palestinian homes near a military barrier on the outskirts of Jerusalem were “shocking and heartbreaking” and should be probed as a war crime, Palestinian envoy Riyad Mansour said on Tuesday.

Addressing the UN Security Council in New York City, Mansour held up photographs of bulldozers, Israeli police and soldiers moving in on the Sur Baher community the previous day as Palestinian families watched on as their homes were torn down.

“In the early hours of Monday, a large contingent of Israeli soldiers entered the homes of the families residing there, forcing them to leave their homes before proceeding to destroying them using military bulldozers and massive amounts of dynamite,” Mansour said.

“The scenes have been shocking and heartbreaking … this is a blatant act of ethnic cleansing and forced transfer, tantamount to a war crime, and it must be fully condemned and prosecuted as such.”

According to Mansour, the demolition of some 10 apartment buildings, most of them still under construction, had left 17 people homeless, including 11 children. Another 350 Palestinians await the imminent arrival of bulldozers on their doorsteps too, he added.

The Israeli military considers the homes, which are close to an Israeli separation wall that crisscrosses the occupied West Bank, a “security” risk.

The Israeli Supreme Court ruled in favour of the military in June, ending a seven-year legal battle, and set Monday as the deadline to knock down the homes.

“We believe in law and order. If you build without a permit, your house will not stay,” Israel’s UN Ambassador Danny Danon told reporters outside the council chamber before Tuesday’s meeting.

“That’s what happened to Jewish homes and to Arab homes… It’s unpleasant. We saw those pictures, it’s not easy to demolish homes. But that’s the rule of law in Israel.”

Israel credits the separation wall – projected to be 720km long when complete – with stemming Palestinian suicide bombings that peaked in the early 2000s. Palestinians accuse Israel of using security as a pretext to force them out of the area as part of long-term efforts to expand settlements. All settlements on occupied Palestinian lands are illegal under international law.

Rosemary DiCarlo, head of the UN’s Department of Political and Peace building Affairs, said the demolitions breached international rules and had hurt the livelihoods of some 300 Palestinian locals.

“Israel’s policy of destroying Palestinian property is not compatible with its obligations under international humanitarian law and contributes to the risk of forcible transfer facing many Palestinians in the West Bank,” said DiCarlo.

Speaking on behalf of the European Union, Britain’s UN envoy Karen Pierce said the demolitions were “particularly egregious” as they occurred in areas that should be under Palestinian jurisdiction, according to a 1993 peace deal known as the Oslo Accords.

The sprawling village of Sur Baher straddles the line between occupied East Jerusalem and the occupied West Bank. It was captured and occupied by Israel in the 1967 war.

The demolitions are part of the latest round of protracted wrangling over the future of Jerusalem, home to more than 500,000 Israelis and 300,000 Palestinians.

Instead, Palestinian officials should review their refusal to engage with a US-led peace effort, which includes a $50bn economic development plan for the Palestinians, Jordan, Egypt and Lebanon, Greenblatt said.

Palestinian officials should “put aside blanket rejections of a plan they have not even seen, and to show a willingness to engage in a good-faith manner, a meaningful dialogue with Israel,” he told the council.

US President Donald Trump would decide when to release the long-awaited “political portion of the plan” soon, added Greenblatt.

“The vision for peace that we plan to present will not be ambiguous, unlike many resolutions that have passed in this chamber,” he said.

“It will provide sufficient detail so that people can see what compromises will be necessary to achieve a realistic, lasting, comprehensive solution to this conflict.”