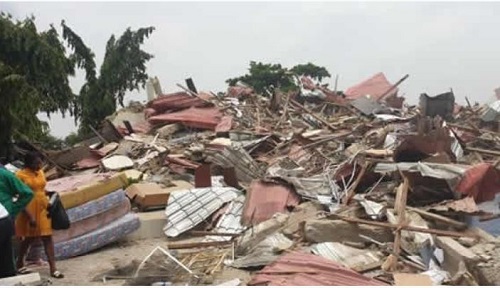 It was learnt that the FCTA officials came to the compound located on Plot 630 T.O.S Benson Crescent as early as 6.30am and pulled down the buildings and staff quarters.

FCTA authorities posted notice of demolition on Friday night after courts had closed; and had demolished the building on Monday morning before any court had opened, thereby making it impossible for anyone to stop the demolition.

The Managing Director of the lounge, Mr. Max Eze, said he was given only 48 hours’ notice instead of the regular 21-day notice which the FCTA usually gives.

It will be recalled that the FCTA had come under intense criticisms two weeks ago when it embarked on the random raiding of fun spots in the city, arresting over 70 women accused of being sex workers.

Many of them were subsequently charged and convicted.

The women claimed to have been molested and raped by policemen, which caused the Inspector-General of Police, Mohammed Adamu, to set up a panel to investigate the incident.

The National Human Rights Commission also invited policemen and officials of the FCTA over allegations of rape and extortion.

Global rights group, Amnesty International, had also lambasted the government and the Police for what it called “arbitrary arrests.”

Cry for justice! Mother of 1 year old raped victim sent out of family house in Lagos

Saraki reacts to EFCC action as mischievous and aim at settling scores.