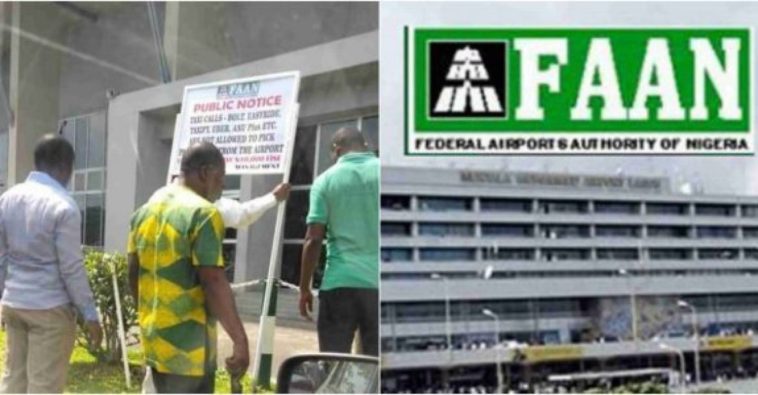 The Federal Airport Authority of Nigeria, has denied banning cab-hailing services like UBER, Bolts and others at the airports across the country.

The agency stated that there is no restriction on these services and passengers are free to use whatever means of transportation they deem fit to arrive or depart the airports across the country.

On Tuesday, a Twitter user posted on the platform that the agency had placed on ban on those services:

“So @FAAN_Official has issued a directive via this billboard to state that @UberNigeria @Boltapp_ng amongst others are not allowed to pick up passengers from the airport.

In a statement released on Tuesday, Yakubu said FAAN is not responsible for the billboard with the restriction notice.

“A group of persons did that without recourse to FAAN management. Please disregard. Members of the public are free to be dropped at our airports by whatever means of transportation,” she said.

The Cable reports that a passenger who simply identified himself as Tayo, said he had a first-hand experience of Bolt.

“When I arrived at Nnamdi Azikiwe International Airport on Saturday, I requested a taxi through Bolt. After I located the driver and got in the car, he pleaded that he wanted to delete the app from his phone,” Tayo said.

“When I asked why he said they were not allowed to pick up passengers from the airport and if he is caught he would have to pay a fine. He said the airport taxi drivers are against them.”

There have been clashes between regular airport taxis and cab-hailing services such as Uber and Bolt. Many airport users say they stopped using airport taxies because Uber and Bolt are cheaper.