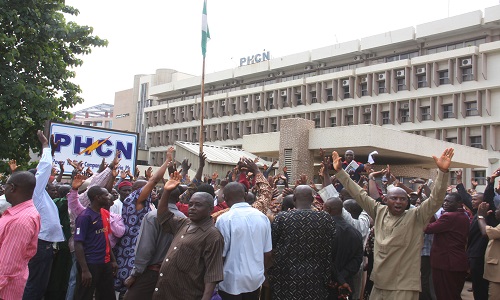 The union said the decision to down tools remained the only option since there was no dialogue with the Federal Government to resolve the lingering industrial crisis in the sector.

Assistant Secretary General of NUEE Anthony Sule said the 21-day ultimatum given to Minister of Power Saleh Mamman expired at midnight on Tuesday.

Sule, in a statement issued in Jos, the Plateau State capital, said the union had no option but to commence an indefinite strike.

The statement said:  “The ministry of power has failed to resolve some issues affecting members of the union since 2013 when the power sector was privatised especially issues that with the over 2,000 disengaged former PHCN workers and their pay off.”

Some of the unresolved issues are illegal transfer of union properties to power investors and the alleged refusal by some distribution companies (DisCos) to remit deducted contributory pension of their members of staff  to pension managers.

He added that these issues were contained in a memo to the minister  dated 7th November, 2019.

Last night, General Secretary of NUEE Joe Ajaero said it was regrettable that the Ministry of Power  failed  to respond positively  to the strike notice  .

Ajaero said the only response from the ministry was the letter sent to the union on the November 18. He said tin the letter, the minister assured the union that something would  be done immediately he settled down.

He said after waiting, the union again wrote the minister on the December 6 but  up till yesterday, nothing had been done.

“The strike letter was sent to the Ministry of Power and there was one letter they wrote, saying the minister is not in the country and that he is still studying the situation. They said the minister would look into everything, that is all,” he added.

He said the union made sure that it sent its letter to all the relevant authorities in the power sector, including security agencies.

He also told The Nation that the strike notice was published in one of the national dailies to ensure that no one would claim not to have seen it.

“I can assure you, the strike will commence any time from now,” he vowed

Ajaero said the union had given more than enough opportunity for dialogue on the issues but that nothing was forthcoming from the government.

A power sector consultant who pleaded anonymity, said yesterday that the GenCos and DisCos were in dire need of  N1.2 billion bailout to improve services.

He also said one of the stakeholders, the Eko Distribution Company, had reached out to the union showing areas it had complied with its workers’ demands.

Ajero said notwithstanding the efforts of the Eko DisCo,  its services would still be affected  since  generation companies supply electricity to  DisCos.