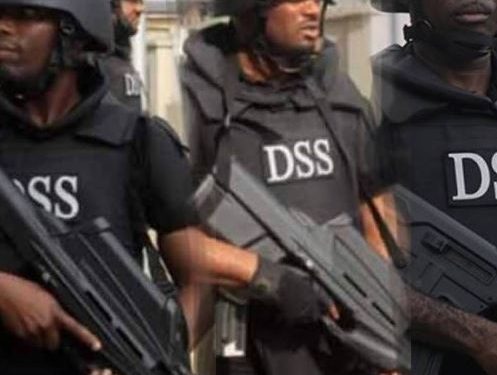 THE Department of State Services (DSS) on Tuesday said it had uncovered “syndicated plots” by some undesirable groups to cause a breakdown of law and order across the country.

It said the groups had made arrangements to instigate protests, mass action and violence with a view to causing anarchy and destabilising the country, “in the coming weeks.”

But a retired senior military intelligence expert, Col. Ola Majoyeogbe, urged the DSS to go ahead and arrest the alleged troublemakers, if it was sure of its intelligence.

He said merely raising the alarm was unhelpful.

The DSS made the claims in a statement by its Public Relations Officer,  Dr Peter Afunanya.

Afunanya said: “These predetermined actions have been designed to take place simultaneously in the major cities across the geopolitical zones in the coming weeks. This is more so that the plotters are also targeting the yuletide seasons to accomplish their sinister motives.

“Considering the implications of these on public safety and national security, the Service wishes to warn the anti-democratic elements responsible for these heinous plots to desist forthwith from their inglorious acts.

“Consequently, parents are advised to rein in their wards and enjoin them not to allow themselves to be used to foment trouble. Similarly, Heads of academic and public institutions are to warn their students and employees respectively from engaging in any untoward activity against public order.

“The Service and other sister agencies are at alert and will ensure that peace and security are maintained in all parts of the country before, during and after the festive periods. Law-abiding citizens are equally encouraged to go about their normal businesses without fear but report any suspected persons or breach of peace to the nearest security office to them.”

He said: “There are a few issues with the statement. First, if the Service has “uncovered” so much about the plots and discovered how they were going to be carried out, why did it not go ahead and arrest the “undesirable” elements?

“Giving the alleged plots a public warning, is not, in my opinion, the best reaction. Should the “plotters” go ahead and attempt to cause the destabilisation anyway, then the Service would have failed to perform a duty imposed upon it by law.

“The service is an ‘intelligence agency’ and it should not allow any threats uncovered to materialize.

“As a long-stating member of the Intelligence community, my advice to the service is that it should immediately commence the arrests of the alleged “undesirable groups”. To ask Nigerians to be on the alert about the “plots” is unhelpful.”

Also, a retired Deputy Inspector-General of Police, Taiwo Lakanu (Rtd), urged Nigerians to shun anything that could divide the country.

He said: “What we need for now is how to grow the economy; Nigerians should come together as one to see to the development of the country. Destabilisation will not augur well for us.

“Secondly, destabilisation is no longer fashionable. Most African countries that tended to do this failed. We should come together and see how the economy will grow. We must make the country a better place for all of us to live in.”