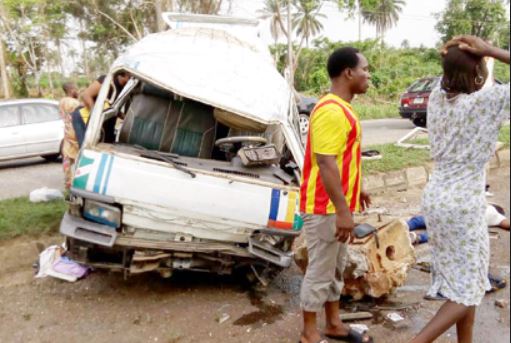 No fewer than 28 people were reportedly burnt to death in a fatal auto crash which occurred along Bauchi -Ningi Federal highway Bauchi state on Thursday.

The accident was said to have occurred about midnight when two vehicles had a head-on collision.

24 passengers were said to be in the Hummer Bus while four were in the J5 bus.

Spokesman of the Bauchi State Sector Command of the Federal Road Safety Corps, Rilwan Suleiman, confirmed the incident to our Correspondent in a Telephone interview.

He said ” Yes it is true, an accident occurred but we are still busy trying to find out the relatives of the deceased. You know in accident like this where people were disfigured, burnt beyond recognition, it will be difficult to identify the victims, even the relatives won’t be able to identify their family members”

said that the accident occurred when the driver of the Hummer Bus who was sleeping, lost control and had a head-on collision with the other vehicle which had cows in it.

He said further that only the driver of one of the bus survived the crash but was left with serious injuries.

He added that he led FRSC officials to the scene of the crash at exactly 6.49 am for a rescue operation.

“The vehicle took off from Dutsinma in Katsina State and was on its way to Adamawa State when the accident occurred. There were 29 people who were involved in the crash and only one survived.

“The driver of the Hummer Bus was sleeping and he suddenly woke up to see the other oncoming vehicle but he lost control and had a head-on collision with the J5.

“Immediately the crash occurred, the two vehicles caught fire and all of them including the passengers and the cows were all burnt beyond recognition. It was only the driver of the Hummer Bus that survived with serious injuries”

Najume cautioned drivers against late night driving to avoid loss of lives and properties on the highway.