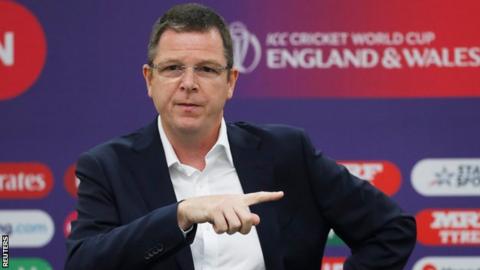 The ICC’s anti-corruption chief, Alex Marshall, says he cannot guarantee a clean World Cup but that it is “low risk”.

Marshall added he had “written, called or what-sapped” about 12 known “corruptors” to “tell them not to come anywhere near” the tournament.

An anti-corruption manager has also been embedded in each of the 10 countries taking part.

The World Cup starts with England’s game against South Africa on 30 May.

“We’ve done training sessions around what we would do if there was a corruption issue at the World Cup,” said Marshall, who is the general manager of the ICC’s Anti-Corruption Unit (ACU).

“The police, National Crime Agency, Gambling Commission and other Agencies are involved [in tackling corruption], but the way I would perhaps summarise it would be to say we do all the thorough and detailed preparation for something which at the World Cup is a relatively low risk.

“You can never guarantee that any event will be free of an issue but what I can say is the corruptors know how well protected this event is.”

Ex-Sri Lanka captain Sanath Jayasuriya was also banned from the game for two years in February after he admitted two breaches of the anti-corruption code.

In a documentary by Al Jazeera, there have also been allegations of corruption against players from England and Australia, whose governing bodies have denied the claims.

Marshall said the broadcaster had not shared any material with the ICC, despite being asked “many times”, but that the investigation remained on-going.

“So far, they [corruptors] have all promised me they are not coming to the World Cup but, sometimes with corruptors, you find they don’t always tell the truth, so we will be taking lots of additional measures to try to make sure we keep them away,” said Marshall.

“Over the last 18 months we’ve charged 14/15 people. None of those are current players.

“The people we’ve charged are administrators, senior administrators, board members, coaches, ex-players and an analyst – people on the edge of the squad, not people currently among the player group.

“In addition to the people we have charged, we’ve also disrupted more than 30 corruptors who are outside our code but we, nevertheless, pursue them.

“We’ve built up a good picture of who the main corruptors are and we are sharing that information with the squads and the players at this tournament.

“This is a very tough event for corruptors to come near.”