Christmas Day Homage: I Hope History Will Be Kind To Me – Buhari 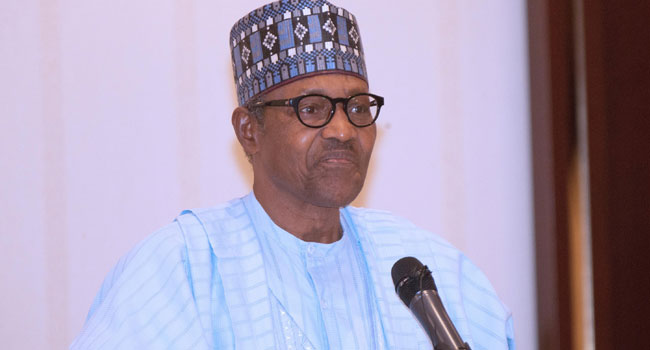 President Muhammadu Buhari Wednesday in Abuja declared 2019 as a very successful year for the nation, thanking Nigerians for believing in him and supporting his administration to take Nigeria to the Next Level.

‘‘We thank God. It has been a very successful year, relative to the composition of this country, both politically and ethnically,’’ the President told residents of the Federal Capital Territory (FCT) led by the Minister, Mohammed Bello, during the traditional Christmas Day homage.

The President told the delegation, comprising religious, traditional and political leaders as well top civil servants and members of the press: ‘‘You are our eyes and ears, we have to listen to you and I hope you are encouraging your constituencies that this leadership means well and is concerned about them.’’

The President reiterated that his administration would continue to do the utmost best to effectively utilize national resources to rebuild the country, recounting that the extreme infrastructure deficit inherited by his administration was worsened by the volatility in the oil market and the activities of militants in the Niger Delta.

He, however, expressed confidence that in the last four years the federal government had recorded sustainable progress in mobilizing resources to rebuild infrastructure across the country.

‘‘This administration sincerely believes that if you get infrastructure right, most Nigerians will mind their own businesses. They may not even care who is in government.

‘‘But when you deny them infrastructural facilities then there is nothing they can do.

‘‘But I can assure you that I thank Nigerians very much from the bottom of my heart.

‘‘When I travelled to all the 36 states before the elections, what I personally observed and the number of Nigerians that turned up in every State to see and listen to me, are more than what anybody can pay or force.

‘‘What I saw made me believe that the majority of Nigerians understand and sympathize with me.’’

The President used the occasion to reassure Nigerians that he was conscious of his duty as president, saying: ‘‘I swore to hold this office in accordance with the Constitution of the Federal Republic of Nigeria and God willing, I will follow the system diligently to the end of my term and I hope history will be kind to me and Nigerians.’’

In his remarks, the host Minister said the Christmas Day homage presented an opportunity for FCT residents to thank the President for his unwavering support.

Acknowledging the support of security agencies in the country, Bello said FCT had enjoyed relative peace because of their collaboration.

He promised that his administration will continue to work hard to make the city safe, secure and open to all Nigerians.

I Have No Feud With Buhari, Says Dasuki