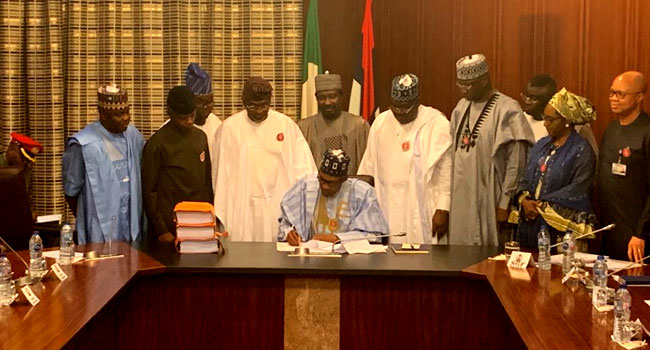 President Muhammadu Buhari has signed into law the 2020 Appropriation Act of N10.594 trillion.

The signing ceremony held on Tuesday at the Presidential Villa in Abuja, a day after Channels Television reported that the President would assent to the Act.

It is the first time since 1999 that the appropriation bill is signed in December, paving the way for the return of Nigeria to a January – December budget cycle.

In his remarks, the President commended the patriotic zeal of the National Assembly for the quick passage of the budget.

He, however, informed the lawmakers that he looks forward to receiving the Finance Bill for assent in the shortest time.

President Buhari, therefore, called on the Ministries, Departments, and Agencies (MDAs) to ensure the effective implementation of the 2020 budget.

He expressed confidence in his administration’s ability to finance the 2020 budget.

In view of this, the President directed that the 2021 budget estimates be submitted to the National Assembly by September next year.

The signing of the 2020 budget was witnessed by the Vice President, Professor Yemi Osinbajo; the Secretary to the Government of the Federation, Mr Boss Mustapha; and the Minister of Finance, Budget, and National Planning, Mrs Zainab Ahmed.

Also present were the President of the Senate, Senator Ahmed Lawan; and the Speaker of the House of Representatives, Mr Femi Gbajabiamila, among other National Assembly leaders.

NSCDC Deputy Commandant to forfeit 60 houses he acquired by fraud