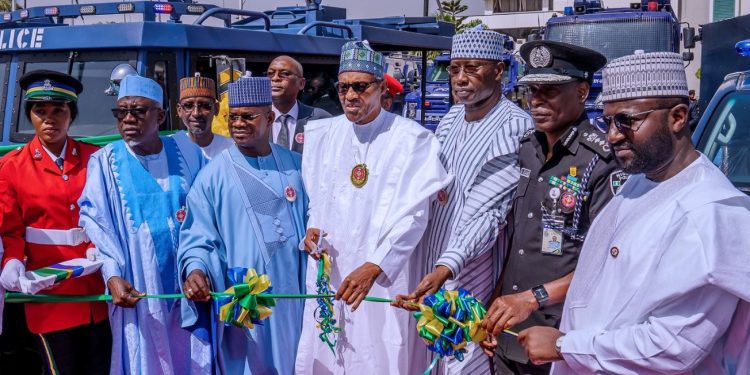 President Muhammadu Buhari on Friday promised more funding for the Nigeria Police.
The President, who commissioned police operational vehicles, the Nigeria Police Force Crime and Incident Database Centre, and the Nigeria Police National Command and Control Centre at the Force Headquarters in Abuja, said he was conscious of the funding limitations of the Force and its threat on the optimal delivery of police services for the citizens.

He pledged that the Federal Government will continue to enhance funding as well as work towards meeting their manpower requirements and welfare needs.

Buhari said the security of lives and property is a constitutional right and priority for his administration.

He said the police is central to achieving this obligation.

Buhari said the police has keyed into the Federal Government’s Next Level agenda to strengthen institutional capacity towards addressing internal security challenges and advancing his vision of a highly equipped and modernized police Force.

He lauded the efforts of the Inspector General of Police, Mohammed Adamu, to guarantee efficiency in the Force despite limited resources.

“I am particularly impressed by the technology-led, intelligence-driven models which he has combined to bring about the stabilization of security situation in the country,” Buhari said.

He said he was aware the IGP inherited an internal security situation that was with the rife with the activities of bandits, kidnappers, armed robbers and other highly organized criminals in some parts of the country.

He said the nature of these crimes affected public confidence in the capacity of the police to protect them, but expressed confidence that with the strategies put in place and the quality of the leadership being provided, the present police force would check the problems and restore confidence.

He lauded the police for their many breakthroughs and recoveries across the country in several intelligence-led and well-coordinated police operations, as well as their great strides in peace keeping functions on other parts of the world.

He urged that notwithstanding the achievements, the police should avoid complacency in the efforts towards ridding the country of crimes.

The President said his vision is to bequeath to the nation a legacy of a reformed, modernized, fully equipped, highly motivated and seasoned Police Force with values of professionalism, respect for rule of law, due process and best international practices in their operations.

“It is cognizance of this that I approved the readjustment of police emoluments, as well as the recruitment of 10, 000 police personnel on an annual basis to motivate and enhance the manpower of the force.
It is also in this regard that I assented to the Police Trust Fund Bill to act as a public, private funding framework that would address funding shortages of the police on a sustainable basis.

He charged leadership of the police to continue to give orientation to officers of the force so they can appreciate their virtues of policing within the dictates of the law to ensure the institution regains confidence and respect from Nigerians.

“We must take cognizance of the fact that in discharging your duties, you should not only be judged by number of crimes you have stopped or convictions secured but also the extent to which the process of achieving your statutory mandate conforms to professional and legal standards,” Buhari said.

IGP Mohammed Adamu said upon assumption of office he set out to redefine policing and in so doing was motivated by the fact that security presents a key component of the change mantra of the Federal Government in the drive to take Nigeria to the next level.

“A well equipped Police Force remains critical to the attainment if internal security objectives. It is in furtherance of this that we set out to enhance our operational capacity towards coping with the dynamics of crime. This informed the procurement within our limited budgetary resources of this operational equipments.

“Also to be commissioned are the National Police Command and Control Centre and the first phase of the Nigeria Police Crime and Incident Data Base Centre.

“Part of our policing strategies is to deploy surveillance technology in our crime management operations. The acquisition of police smart surveillance vehicles which are fitted with high resolution, long-distance CCTV monitoring equipment with night electronic functionalities and are linked to Nigerian Police National Command and Control Centre is to achieve this purpose.

“The vehicles would be deployed for real-time electronic monitoring of the Abuja-Kaduna highway and other major highways and vulnerable locations across the country including electronic surveillance of NNPC pipelines in the country. The patrol vehicles, on the other hand, will be utilized to strengthen the Safer Highways Patrol Scheme, while the tactical and armored personnel carriers would be used for special police operations, especially in support of anti-kidnapping, antibanditry and anti-robbery operations. The water canon trucks would be deployed for the management of civil disorders within the dictates of our democratic values, rule of law and international best practices.

“The Nigeria Police National Command and Control Centre will enhance effective operational coordination and real time monitoring of situations via video links between the Force Headquarters Abuja and all the 36 state police commands and the FCT. Similarly the Nigeria Police Crime and Incident Data Biase Centre is to aid the police is acquiring credible electronic criminal data base to support criminal investigation and strategic operational and tactical planning.

“Today’s event represents the first phase of our reequipment plan and with the effective takeoff of the Police Trust Fund, we shall sustain our blueprint of modernizing all components of our operations towards addressing any form of threat to our internal security,” Adamu said.

Minister of Police Affairs, Alhaji Muhammad Maigari Dingyadi, said the Nigeria Police Force has finest group of police officers and men, who are not only professionally competent but loyal and deeply knowledgeable.

He said they were often ready to make sacrifices towards ensuring internal security, adding that the challenges of policing in Nigeria is not in the personnel but largely due to finding, welfare, limited manpower and training.

He said President Buhari was fully conscious of these challenges and requisite presidential marching orders have been given to the Ministry to policies and sets of actions that will not only address them.”

Dingyadi used the opportunity to draw the attention of the President to the challenge of the pension regime of the Nigerian Police, and urged that it should be addressed as part of the welfare policies of the Federal Government for the police.

Accidents claim 338 lives in Ogun from January till date — FRSC