By Crime Focus On May 13, 2019
0
Share
A Nigerian guy, identified as Segun, has left his family and friends in panic mode after he shared a video of himself trying to commit suicide on Twitter.
The sad incident took place last night.
It was gathered that Segun decided to take his own life after scoring 167 in JAMB.
Segun had earlier shared series of tweets describing how he scored high marks in his JAMB examination, but when he got someone to sponsor his education, he got a low score of 167.
Devastated by this, Segun then suggested he’d be taking his life with a poisonous drink on Sunday by 9pm.
True to his word, he shared a video of himself drinking sniper. Thankfully, his friends were able to reach his mother, He was rushed to the hospital and is said to have been resuscitated.
In 2018, Segun took to Twitter to plead for help. Read below his series of tweets: 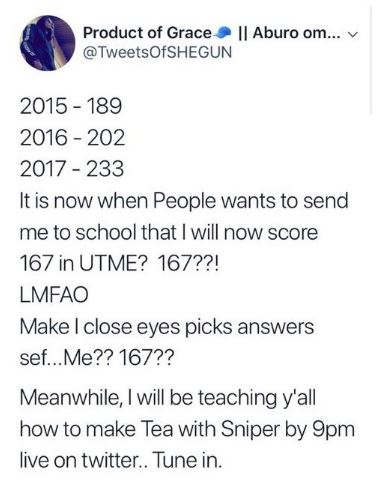 Man sentenced to death for killing his brother

10 Ways To Protect Children From Cyberbullying