Comedian, Ayo Makun slammed a fan who asked him to advise veteran comedian, Alibaba on the way he bills his show.

Reacting to Alibaba’s post to Yahoo boys and their supporters to avoid him because he only wants to associate with people who lift him up, the lady also advised that the comedian stop selling his comedy show tickets for N1million Naira and above.

According to her, the veteran who always speaks against “Yahoo boys” is also a yahoo man.

In response, AY slammed her and said she needs to mind her business and stop complaining on behalf of those who can afford to pay for the comedy show. 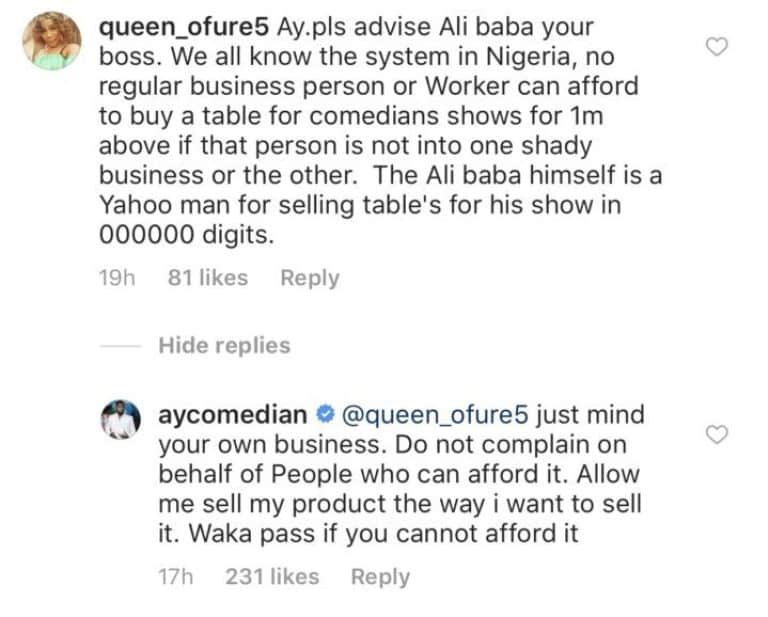 Recall that Alibaba rained curses on those who defraud people who work hard to earn their money and use such money to pop champagne.

The ace comedian made this known in reaction to a post narrating how a struggling woman was scammed of her life savings by ATM fraudsters.

Stealing from hustlers, now makes you a smart guy. You then take the money, go buy clothes, pop champagne, buy bling bling and drugs. When someone says it’s wrong, you have the guts to be defending them. For any of you who defends these thieves, you will never end well. Go and write it down. Shebi we all are in Nigeria.

Police foil the spread of poisonous ‘Ponmo’ in Lagos

Police foil the spread of poisonous 'Ponmo' in Lagos