Adoke under interrogation over $1.06b Malabu deal 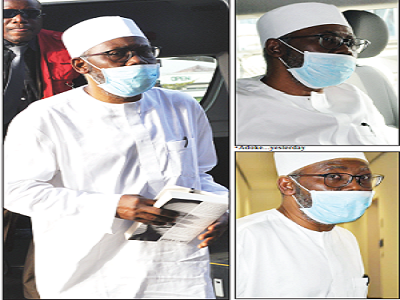 A former Attorney-General of the Federation and Minister of Justice Mohammed Bello Adoke (SAN) was on Thursday taken into custody by the Economic and Financial Crimes Commission (EFCC), shortly after returning into the country.

He was undergoing grilling at the Wuse 2 Annex Office of the anti-graft commission as at 9.32pm. Adoke’s passport was seized by the agency.

The EFCC on its twitter handle said the ex-AGF left Dubai after it mounted pressure.

The anti-graft agency tweeted: “The EFCC boss, Ibrahim Magu, and Dubai authorities have held series of meetings in respect of the former attorney general. He was accompanied by INTERPOL officers on Emirates Airlines Flight 785.

“The aircraft departed the Emirates commercial capital at about 11am Dubai time (8am Nigerian time) and touched down at the Nnamdi Azikwe International Airport, Abuja at 3:45pm. Officers of the EFCC were on ground at the airport when he arrived.”

A statement by its spokesperson, Wilson Uwujaren, said: “His return to Nigeria clears the way for him to answer to the charges against him”.

He added: “Mr Adoke who fled the country in 2015, has pending criminal charge brought against him by the EFCC for alleged abuse of office and money laundering in respect of the granting of the Oil Prospecting License (OPL) 245 to Shell and ENI.”

The former minister wore a white Kaftan and a white cap to match. He also had a nose mask on.

Adoke was picked up at the foot of the aircraft by EFCC operatives and transferred into a Toyota bus marked RBC 931 BV.

The ex-minister kept himself busy reading a book while waiting for airport formalities.

Adoke’s lawyer, Mike Ozekhome (SAN), entered the airport arrival  hall at about 4. 12pm. He was making telephone calls, walking up and down. Shortly after, he exited the hall.

Anxious reporters followed him to the car park where he claimed his client had been taken  to the INTERPOL  office in Abuja.

Ozekhome, in a statement, quoted him   as saying he was not afraid of trial.

The Nation learnt that after talks with the EFCC, INTERPOL accepted Adoke’s  offer to  return on his volition and submit himself for prosecution.

A top EFFC source confirmed that in the last 48 hours, there had been talks between INTERPOL and the anti-graft agency on the terms of  Adoke’s return.

He said: “The Acting Chairman of the EFCC had been in Dubai for a meeting and he took time off to be part of the talks.

“There was a stalemate over a letter of attestation on the vacation of the bench warrant on Adoke.

“While Adoke insisted that he was no longer wanted for any crime, the Office of the Attorney-General of the Federation did not write a letter of attestation to back his claim.

“So the options available were to continue to keep Adoke in INTERPOL custody, a prolonged legal battle, outright deportation, likelihood of extradition and consenting to Adoke’s voluntary offer to return to Nigeria.

“Adoke did not want deportation since he is still innocent until proven guilty. Having watch-listed Adoke, the options before the INTERPOL were: deport the ex-AGF or allow a voluntary return under a guided trip by its detectives.

“The EFCC was expected to take custody of Adoke on arrival at the airport.

“These are the details of the pre-trip talks  between Adoke, INTERPOL and the EFCC.”

An EFCC source said: “Adoke is undergoing intense grilling and it has become necessary to detain him. He will be with us for some days as allowed by the law.

“We will accord him necessary courtesy and be fair and thorough in our interrogation.

“We seized his passport at the airport immediately we picked him.”

Lawyers to the ex-AGF claimed they were not allowed access to their client.

A counsel in Chief Mike Ozekhome’s chambers, Oluchi Vivian Uche, said: “We proceeded alongside my boss to INTERPOL, in Area 10. The CP showed us his discharge letter to EFCC

“We are currently with the EFCC but not allowed access yet because they are still clocking him in.”

Adoke is being probed alongside others over $1.06billion Malabu Oil Block (OPL 245) deal.

The ex-AGF was arrested in Abu Dhabi, United Arab Emirates, on November 11 after being watch-listed by the EFCC.

He travelled out of Nigeria in May, 2015 on the expiration of his term as minister.

Adoke, Dan Etete and others are expected to account for the $1.06b deal on Malabu Oil Block (OPL 245).

In one of the charges before the High Court of the FCT, Adoke, Etete, Aliyu Abubakar and Malabu Oil and Gas Limited were alleged to have received $801,540,000 from Shell Nigeria Exploration Production Company, Nigeria Agip Exploration Limited and ENI SPA in relation to the grant of Oil Prospecting Licence (OPL 245).

The allegations against Adoke are: Conspiracy and money laundering on Malabu Oil Block;   conflict of interest on  the said oil  block and  involvement in the $9.6b  judgment award against Nigeria by Process and Industrial Developments (P&ID)

Adoke has denied all allegations.  His lawyer said: “On the morning of Tuesday, 11th of November, 2019, our client arrived Dubai for a scheduled medical check-up.

“While he was undergoing immigration checks, he was informed that Interpol had a Warrant to arrest him.

“He was shocked to his bones and marrow. This is because although a High Court of the Federal Capital Territory (FCT) had issued a warrant of arrest against our client on the 17th of April, 2019, following an ex parte application by the EFCC, the same court had duly vacated the said arrest warrant order on the 25th of October, 2019, following our challenge of the ex parte order, and after a  robust court argument between the EFCC (government) counsel and my humble self.

“There was therefore no existing arrest warrant on which the Interpol’s arrest was made. This was well reported by the media.

“Our client duly showed Interpol officials copies of the certified court order by Justice Danlami Z. Senchi. He also showed them the 17th of April, 2018, judgment of the Federal High Court, Abuja, delivered by Justice Binta Nyako, to the effect that our client could not be held liable for obeying lawful presidential directives on the OPL 245 transaction.

“The Interpol officials, however, said only the Warrant of Arrest was communicated to them by the Federal Government, and not any of these overriding court processes.

“The vacation and setting aside of the warrant of arrest order made by   Justice   Senchi was curiously not communicated to the Interpol or the UAE authorities.

“But, they insisted that they could only deal with the Nigerian government, which must first communicate to them, the said vacation and setting aside of the warrant of arrest.

“Our client told them that he was ready to return to Nigeria on his own accord after his medicals; yet, they still kept him in illegal custody for over one month after running into a legal logjam. It was very clear to them that the government of Nigeria did not have any legal basis or grounds to extradite Mr Adoke back to Nigeria.

“In his undertaking before the Dubai authorities, Adoke signed as follows: “I would go to Nigeria authorities to solve my problem, and without any stress or pressure from Dubai Police or anyone.”

“It was only on 21st December, 2016, nearly one and half years after he went to the Netherlands to pursue his Masters  degree that the EFCC charged him before the FCT High Court on his alleged role in the OPL 245 transaction.

“Our client verily believes he has done no wrong in merely carrying out his statutory duties. Indeed, his houses in Kano and Okene in Kogi State were extensively searched even in his absence, with the EFCC finding nothing incriminating against him.

“He has repeatedly said and he now reiterates it again and again that he did not collect one kobo or any sum howsoever, from the oil and gas transaction. He stands by this truism.

“Indeed, it must be pointed out that two witnesses who testified at the ongoing trial of the oil companies in Milan, Italy exonerated Mr Adoke. Mr Edan Tofik ogly Agaev, a former Russian Ambassador to Colombia.

“One of them said he was pressured in to mentioning a name in his interrogation by FBI and he consequently called Adoke’s name.

“The other, Mr Vincenzo Armanna, a former ENI manager, who is also on trial, told the same court that our client had. In fact threatened to arrested and prosecute ENI officials for attempting to negotiate kickbacks in the transaction.

“Our client insists that this is the truth, the whole truth and nothing but the truth.”

Low revenue a threat to budget