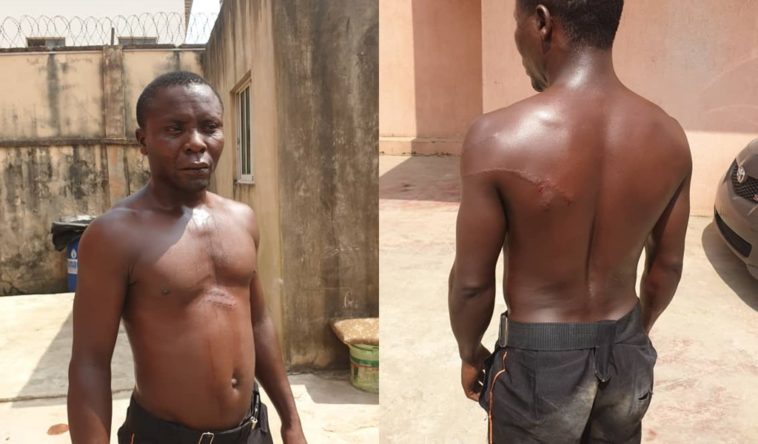 A Twitter user with the handle @ehimaggie has narrated the sad experience he witnessed after a tenant allegedly brought two soldiers to assault a security man for leaving his post.

The man took to his social media page and wrote:

“I write this story with so much sadness .

This is our gateman name Felix. He was beaten mercilessly today by two soldiers and one civilian.

What was his offence???

He was intimidated by a tenant named Wale Adebiyi.

Why will one be treated this way??? Just because he was not at his duty post to open the gate. Wale assaulted and reached for spanner to hit the gateman. For self defense , the gateman picked up a bottle for just incase Wale hits him.

Wale decided to call 2 soldiers to deal with

Felix. He told Felix that he will make his wife nd daughter suffer. Ara adugbo ppl came out to beg Wale . He ignored. Felix was dragged in muds and beaten with a bicycle chain like a thief.😭. Felix was bleeding. The soldiers left because of the intervention of other people.

Felix was advised to go the police to report the issue. He got to the station. He was asked to write statement nd get doctors report. The worse part was …he was asked to pay some money. Where will one who earns 20k get money to pay the police before they do thier job?

I just want Felix to get justice.😭😭

Here is Wale’s picture …the guy with no conscience. The one who thinks hes a demi god😏”